Good Friday marks the start of the annual Southern Straits regatta sponsored by West Vancouver Yacht Club. AYC is well represented by ICON Long Course, Passepartout medium course, and Wild Rumpus short course. This race has traditionally been an early season gear buster featuring winds over 50 knots and heavy seas, also cold weather and light winds. Follow along via the website or travel to Vancouver and join in the start line festivities, all details are available via the website. Pancakes, Easter bunny, sailing, border crossings, this regatta has it all!! Pangaea probably has the most stories of gin slushies and autopilot antics. Handyman once broke the 48 hour mark, Cassiopeia broke less than 5 miles from a 1st overall finish, Kermit broke the skippers shoulder, Ajax broke 23 knots then broke(almost everything), Passepartout broke a reaching strut, Andy broke the question to Steph on a delivery up, what does this year hold???
Posted by captain midnight Posted on Saturday, March 27, 2010 No comments:
Email ThisBlogThis!Share to TwitterShare to FacebookShare to Pinterest

Race it or cruise it just get it out there! For those feelin' like cruisin' it join the fun at the Annual Shakedown cruise to Bellingham. Secret local knowledge is Port of Bellingham offers one free night of moorage per calendar year! Let Cruise Capts. Steve Dubnoff and Marian Lowe know your plans so festivities can be arranged, also Saturday night dinner rendevous @ Anthony's!

For those looking for competitive adventure on the salt chuck join in the Annual Smith Island Race starting Saturday @0930 at the West end of Guemes Channel. This is the "Big Daddy" of the AYC racing season. This will be your last chance to fine tune the crew before the Tulip regatta, don't miss it!

Speaking of Tulip Regatta; Rockfish Grill/Anacortes Brewery has signed on as beer sponsor so show up thirsty and patronize these fine folks at all times. If you plan to do Tulip please sign up on line ASAP so we can better prepare meals and such. Even if you're not racing plan on coming down Saturday night to cut a rug to the Gertrudes Hearse featuring AYC member and multi-hull sailor Keith Stone!
Posted by captain midnight Posted on Tuesday, March 23, 2010 No comments:
Email ThisBlogThis!Share to TwitterShare to FacebookShare to Pinterest

The results from the 2010 running of the Round Guemes Race (race #2 in the Champagne Series) have been posted - you can check the results out HERE.


Each boat had to roll the dice at the start and decide which way to round the island - in the end the boats that went clockwise won out as the wind died and shut the door in Guemes Channel for those who went counter clockwise!


The race was blessed with a little "liquid sunshine" at times, but a good time was had by all.  Here is the track from one of the boats... 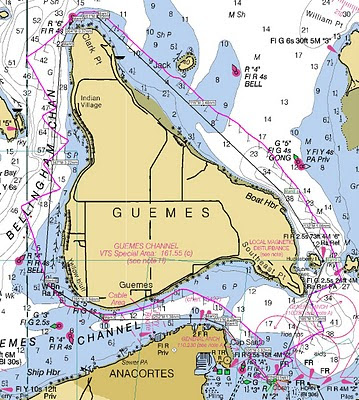 Posted by Mistaken Posted on Sunday, March 21, 2010 No comments:
Email ThisBlogThis!Share to TwitterShare to FacebookShare to Pinterest


It is easy to register for the Tulip Regatta online. Plus it really helps with getting sponsors, promoting the event, and working with catering. Doesn't hurt to have registration in for the class breaks either... we can start thinking about how many starts to run and who is interested. It'll just take a few minutes, and you'll be set.


Should be the best Tulip regatta EVER! This is usually just a regatta with our local fleet, but this year we'll be hosting boats from Orcas, Oak Harbor, Bellingham and Seattle (and beyond!). We'll have Gertrude's Hearse in the house on Saturday night, Trailer Olympics in the parking lot, and the first SC27 Northwest Championships in a one-design start. Walt has done a fabulous job getting the regatta planned and promoted.


Now, it's your turn... sign up.. now! Go! You're already on the website, linky up to registration!
Posted by captain midnight Posted on Saturday, March 20, 2010 No comments:
Email ThisBlogThis!Share to TwitterShare to FacebookShare to Pinterest

For those of you racing enthusiasts out there, the March issue of the Lido Fleet Newsletter is now avaiable - you can get it HERE or in the Lido page in the racing section of the club website.
Posted by Mistaken Posted on Friday, March 19, 2010 No comments:
Email ThisBlogThis!Share to TwitterShare to FacebookShare to Pinterest

The annual round Guemes race takes place this Sunday. Some people work on Saturday or the kids have games or whatever so check the schedule we've thrown in a few Sunday races this year. Start boat is Lawson Reef winner Kinetic Ki. Choose your course carefully, either way around is legal, also if you choose to round Cypress as well that's ok too! Yes it's happened.....Make sure to get your finish time to Kyle aboard Kymodoce, or assistant scorers Chris and Kyle Roethle aboard Emoyeni ASAP, this makes a tricky job much easier. Rumor has it the elapsed time record will be under assault from the BIG Blue Show. Beware the NW tip is a bit shallow, but there is also a lot of current! Be on the lookout for something green and 27' long with a happy new skipper owner aboard.
Posted by captain midnight Posted on Tuesday, March 16, 2010 No comments:
Email ThisBlogThis!Share to TwitterShare to FacebookShare to Pinterest

For those of you that haven't heard, there is a group of sailors in our community affiliated with AYC that actively race radio controlled boats. It is an AMYA sanctioned club and its members build, sail and race. Most sail the Soling 1 Meter boats, but they welcome the company of all model boat sailors.

Weather permitting, they meet all year at Cranberry Lake in Deception Pass State Park every Tuesday and Saturday at 1 PM for two hours or so of sailing and friendly racing.

On Friday night, March 26 (3 Buck Night) at the AYC clubhouse the ARCS group will be staffing the event and displaying their radio controlled boats - come out and check it out...

Posted by Mistaken Posted on Monday, March 15, 2010 No comments:
Email ThisBlogThis!Share to TwitterShare to FacebookShare to Pinterest

The Lawson Reef Race results have been posted - winds were SE 15-20 with a strong ebb current at the start.  Ten boats participated with the following winners:


Next week - Round Guemes!  This should be a challenging and very tactical race.
Posted by Mistaken Posted on Sunday, March 14, 2010 No comments:
Email ThisBlogThis!Share to TwitterShare to FacebookShare to Pinterest

Saturday March 13th features the first of AYC's premiere distance race series Lawson Reef. Just shy of 20 miles this race has traditionally been a navigators challenge. The big boats have a chance to stretch their legs and racing in Rosario Strait can get lively; ask anyone that participated in the Girts Rekevics Foulweather Race/ Cruise this year. We've already sold nearly 20 race packets so get yours today! Simply sign up on line and download the packet!
Posted by captain midnight Posted on Monday, March 08, 2010 No comments:
Email ThisBlogThis!Share to TwitterShare to FacebookShare to Pinterest

Reflections on the 33rd America’s Cup - by Steve Orsini

Hey racers do you know Jack?

Saturday March 6th kicks off the racing season with the ever popular Chuck Mallary designed Jack Island Race. Anytime you sail through the slot @Huckleberry there is a chance to win.

Here are the details: