Mindless Musing from Someone with Excess Time...

Given that we have now completed all our scheduled distance races for the first half of the 2010 season we decided to take a look at the age old question - which scoring method results in fairer racing in our club - Time on Time (TOT) or Time on Distance (TOD)?

Now for all you closet theorists out there it is time to put away your favorite stories and take a hard look at the numbers - yes we know that half of you have already gone back to watching TV, but keep reading and you might learn something...

For this analysis we re-scored all AYC distance races since 2007 where there were more than two finishers using both TOT and TOD.  When doing this analysis we found that nearly all races fell into one of four general patterns: 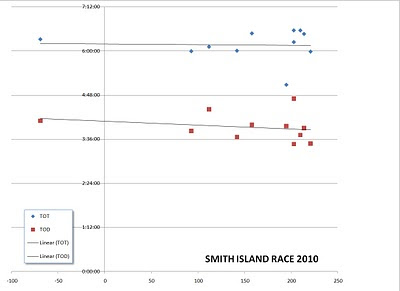 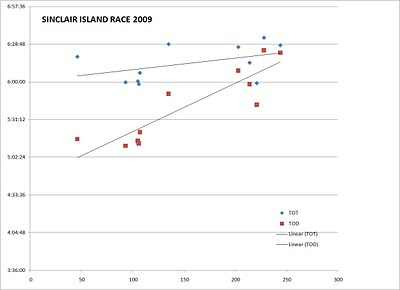 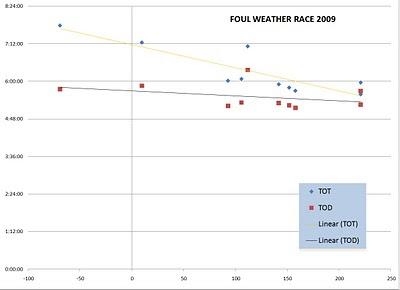 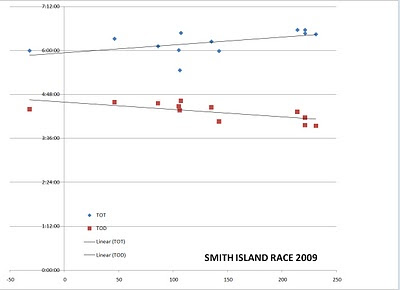 Now that you are totally confused we need to turn to some relatively simple statistical regression analysis tools to sort out this mess - and the results are somewhat surprising:
When analyzing these races (all AYC club distance races run since 2007 where more than two boats finished), TOT scoring has an 8.4% bias in favor of slower boats while TOD scoring has an 0.1% bias in favor of slower boats.
To summarize, at least for club distance racing at AYC in our local waters with our local fleet, TOD scoring seems to produce less biased results - so there you have it...
PS - we will continue to analyze the numbers and give you an update at the end of the season!
Posted by Mistaken Posted on Thursday, June 10, 2010
Email ThisBlogThis!Share to TwitterShare to FacebookShare to Pinterest