For those of you who haven't heard of this event, the 2010 running of the Benson Cup is scheduled for Sunday, October 3, 2010.

The Benson Cup is a race named after Father Benson who ministered to the people of San Juan County for many years. He had a small boat that he used to travel from island to island. From that boat came a copper tea pot which became the Benson Cup Trophy. The race has been run since 1981 and the course is from Jones Island around Waldron Island and back (any way), with a distance of 15 miles.  The proceeds from the race are given to the Children's House a local San Juan County charity. 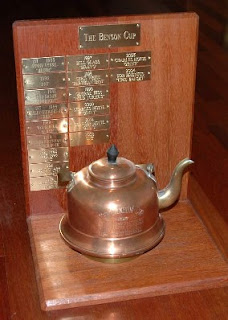 Posted by Mistaken Posted on Thursday, September 09, 2010
Email ThisBlogThis!Share to TwitterShare to FacebookShare to Pinterest