Plan now for next summer... 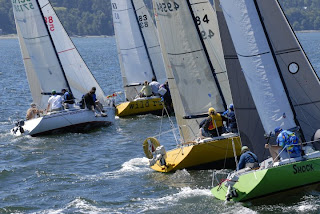 It's officially official now. The 2011 Santa Cruz 27 Nationals will be held @ Whidbey Island Race Week July 17th-22nd. It is likely there will be one design class racing @ Tulip and Windermere, this year featured 9 boats. The SC 27 was designed in 1973 and started sailing in 1975, there are probably about 100 or so around in decent sailing condition, we have located about 20 between Hood River, OR and Vancouver BC. There are three currently on the hard here in A-town, Double Helix, Solitaire and King Cole. It would be excellent to see some local sailors join Wild Rumpus, Cookie Monster, Limey Bastard, Kokopelli, Ol Yeller(B'ham), Saltheart Foamfollower (Orcas) and the Seattle fleet boats. This is a fleet you can compete in that is not dominated by National and International sailing stars. We took a local boat bought 3 sails over a two year period, borrowed a trailer, invited some friends and placed second at the 2010 Nationals. I know there are a bunch of great sailors in our club that would be interested in joining the fun and competition. Stephanie Schwenk and Chuck Tidrington are the local cheerleaders, contact them for more information!
Posted by captain midnight Posted on Sunday, September 19, 2010
Email ThisBlogThis!Share to TwitterShare to FacebookShare to Pinterest