Putting the "Foul" in Foul Weather...

The Girts Rekevics Foul Weather Race got underway in fine style on Saturday morning.  Big fluffy snowflakes and a light southeasterly breeze greeted the 20 hardy race boats in Guemes Channel.  15 boats from AYC (and guests!), and 5 from Canada.  The start got off right on time!  Especially if you were reading the AYC race packet, and not so much if you were reading the NOR.  But that's another story...

A fine job by Colin and crew, and if we were able to tell time on the Rumpus crew we surely would've been right there on the line!  Grafix won the pin end and had a fabulous round up to prove to the rest of us that they picked the windy end of the line.  They dashed away with Crazy Ivan and left the rest of us sitting there wishing we had thought of that.  The "boat" end of the line was packed with like-minded sailors as us... planning for a big blow and a big push to the left.  In the end, it was a tight crowd of kites and boats of all shapes and sizes, drifting along between gusts.

By the time we hit Thatcher Pass, the wind had built to 15 knots or more and you could hear the sound of wipeouts and flogging sails behind you but you didn't really dare spend too much time turning to watch them.  It was a lively ride all the way to the Lopez ferry dock, where most of the boats hit the wall... You can't get too close to the corner of Lopez or you'll get trapped, but the farther away you go, the longer the distance.  Someday I will learn to round that corner... then 15 minutes of close headsail reaching, and it was time to hoist again and head for Friday Harbor.  Another fabulous run in 15+ knots, snowing lightly, and we took our time and sailed into the harbor.

Once again, the dock party was super fun with many of the boats tied up in the same neighborhood.  On the Rumpus, we put up our new white trash silver tarp boom tent, turned on Mr. Heater Buddy, and turned up the tunes, and pretty soon there was at least a dozen sailors on board drinking our rum and having a great time.  Dinner and Awards followed at 6:00 at the Downriggers restaurant.  Chris Roethle and crew put together a fabulous event, and it all came together with times, scores, dinners, shirts, and all the other things that make an event..  Kyle Saum took time from the dock party to score the race (thanks!).  Judy Rekevics, Roger Jewett, the Thomson's, the Rubber Chicken and many wives and friends came to celebrate.

Victory went to Chris White on the Crazy Ivan, then Little Blue Dune Buggy and Norn (go sc27!), Grafix in 4th, then (an amazing comeback by...) Passepartout.  Rumpus came in 6th, then the mighty Syn-di-Cat, and the rest you'll have to look up in the results.  There was an after-party at the China Pearl, and many of the sailors danced the night away into the wee hours of the morning.  A huge thank you to all the boats and crews and volunteers that participated.  A big shout out to the guests of AYC who delivered boats to Anacortes in the snow just to join us:  Time Bandit and Norn from Orcas, Waioli from Lopez, Blackfoot from Bellingham, Little Blue Dune Buggy from Sloop Tavern Yacht Club, plus our new Canadian friends.  It would've only been half as fun without our guests.  Also a huge thank you to Dave Malsed and the Friday night cooking crew and bartenders.  They were given short notice that we were having extra guests for dinner, and put it all together with a smile and everyone left the club happy that night.  Here's to a great year!  Just like Girts would have wanted it! 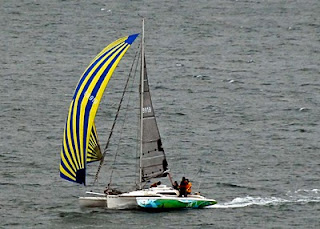 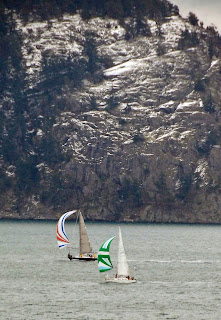 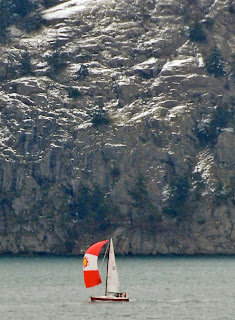 Posted by Mistaken Posted on Sunday, February 27, 2011 No comments:
Email ThisBlogThis!Share to TwitterShare to FacebookShare to Pinterest

This Friday the 25th, is not only another of the ever popular "3 buck nights" we will also be welcoming crews from Royal Victoria, Turkey Head, and Sydney North Saanich Yacht Clubs. There are 15 Canadian boats planning on joining the 20 boats signed up for the Girts Rekevics Foul Weather Race starting Saturday morning @ 0930. The doors open @ 1730 Friday, let's welcome these foreigners and show them some good 'ol AYC hospitality!
Posted by captain midnight Posted on Wednesday, February 23, 2011 No comments:
Email ThisBlogThis!Share to TwitterShare to FacebookShare to Pinterest

AYC represented in another test of sailing prowess! Saturday the 21st was the OIYC annual Winter Shaw. Many a sailor was feeling a little rough Saturday morning after helping the pirate queen Steph celebrate another year of life on Earth. Thanks to all that came Friday night and especially our illustrious bartenders! Oh yeah sailing; well it was windy Saturday morning and Colin E who is wiser than he looks pulled the plug before the first wave broke over the bow. I can tell you this; it is incredible how wet and cold saltwater can be without freezing. Most boats left around 0700 and by 0800 it was blowing over 40kts and the seas were building in Rosario Strait. The admirals were aboard the state ferries as the delivery crews battled to make a 1100 start off Orcas ferry dock. Some were successful, some were not, Syndicat blew out a jib, Rumpus was completely underwater twice, and Passepartout opted for a fire place and likely red wine.....Jah mon was of course busy planning their daily blue plate special and playing cribbage with a crew of 1000's.Upon arrival in Orcas bilges were pumped and crews arriving by ferry quickly hopped aboard any boat floating that made the start line. The start was in a building Westerly and at the corner entering Upright Channel the fleet looked like turn 4 @ the Daytona 500 complete with broken spinnaker poles, out of control broaches, and lots of prime photo ops! The race was won and lost as boats jockeyed for position on the reach/run/beat South. The wind filled in solid from the West in front of Friday Harbor with 20 kts on the nose. Soon sheets were eased and the fleet started the epic battle in Wasp Passage. The smaller boats were able to tack and or gybe as needed the larger boats battled an adverse current using any trick they could. A sunshine happy reach to the finish and then the obligatory woulda, coulda , shouldas......AYC brought home hardware in each div. : fast boats Crazy Ivan 2nd place, slow boats Hassenfeffer 3rd, Sc-27's that blonde birthday girl Stephanie 2nd place. Also Jahmon 6th in fast boats and Emoyeni 5th in slow boats. Foulweather race Saturday, let's have some mo fun!
Posted by captain midnight Posted on Sunday, February 20, 2011 No comments:
Email ThisBlogThis!Share to TwitterShare to FacebookShare to Pinterest

Rumor has it we have 19 Canadian guest vessels signed up for our Girts Rekevics Memorial Foul Weather Race/ Cruise to Friday Harbor. Hey y'all let's step up and show them they aren't about to take the newly minted "Stanley's Cup" (actually a thermos) home with them to the frozen North...I'm all for being a good host but let's get the AYC fleet out in force and put the smack down on our guests, or at least give them a run for their loonies. (money) Click on the link and join the fun in Friday Harbor, (home of Herb's Tav, China Hurl, and other fun places) Downriggers is cookin and hey with the time limit in place you can still bail on your skipper take the fairy boat back to A town and sleep in your own bunk!
Posted by captain midnight Posted on Friday, February 11, 2011 No comments:
Email ThisBlogThis!Share to TwitterShare to FacebookShare to Pinterest

Mark your calendars for Feb 18 1900hrs @AYC. Come help Pirate Camp Queen Stephanie Schwenk celebrate her birthday. Of course regular social hours start @ 1730, then AYC will take on a tropical twist. Karaoke is planned and everyone is encouraged to bring thier favorite pu-pu platter. Jerry, Bill B, and Ed have volunteered to hold down the bar, of course if you have your ticket and would like to help please do. All are welcome. Likely there will be some Bellinghamsters in the house as the OIYC Shaw Winter Classic starts Saturday. There will be a potluck @ Wareham's cabin at the top of the dock in West Sound following the race, we can likely send a detachment of revelers to the awards ceremony to bring home the goods. This is a terrific race and really cool pottery trophies, hey the football season will be over by then, why not go for a sail? Watch for swimmers in Wasp Passage still wearing tropical birthday garb.....
Posted by captain midnight Posted on Sunday, February 06, 2011 No comments:
Email ThisBlogThis!Share to TwitterShare to FacebookShare to Pinterest
Newer Posts Older Posts Home
Subscribe to: Posts (Atom)