So much for swimming in the Ocean around here!!!!
UCLUELET, B.C. (West side of Vancouver Island)

While the ocean vessel 'Dawn Raider' was commercial fishing for dogfish, this Great White was hooked in the mouth but only resisted slightly for 15 minutes before it came up alongside the boat to have a look; long enough for one of the crew members to slip a rope around it's tail !!!

The Shark took off towing the 42 foot fishing boat backwards through the water at about 7 Knots. Just like in JAWS, the boat was taking on water over the stern and the crew watched in horror as the shark would actually jump completely out of the water at times. This went on for an hour before the shark finally drowned.

She weighed in at 1035 LBS.. It is suspected she followed a weak El Nino Current into local waters in search of food. Although mid 60 deg. Water is considered ideal for these sharks, the larger ones can tolerate water in the low 50s. 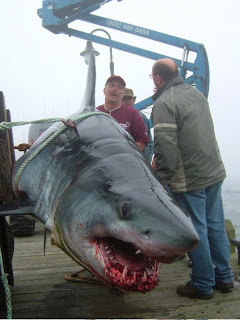 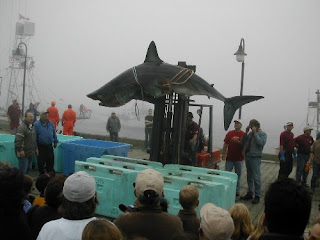 Posted by Mistaken Posted on Wednesday, March 02, 2011
Email ThisBlogThis!Share to TwitterShare to FacebookShare to Pinterest