Four AYC boats made the trek North to the West Vancouver Yacht Club for the Southern Straits Regatta. This annual race starts on Good Friday each year and features long 125nile, medium 95 miles and short 60 mile courses. They are different every year.This year Wild Rumpus was short, Passepartout was medium and Night Runner and Icon went long. The trip North featured the usual antics and hijinx with the customs service, Nexxus ain't always what it is purported to be.....A trip to the emergency room for the Wild Rumpus crew, gotta watch out for the outboard when the boat is on the trailer! In any case the WVYC put on a terrific meal, weather briefing, and a free keg (imagine that, free beer!)

The start includes a brass band, a visit by the Easter bunny, a whole bunch of current and very interestingly the RC reporting over early boats via VHF even before the start. Of course they were Canadian boats, but I digress. The Passepartout boys took one look at the flat water and bleak forecast, fired up the iron genoa and headed South for Anacortes. Icon, Night Runner were in the first start and beat out of Burrard Inlet under light Westerlies and sunny skies. Wild Rumpus with Andy driving for once cleared the line on port tack, had one starboard tack boat dip under us(did you just read that right?, yes that is what happened) then got buried by a wall of starboard tackers. To say we took a flyer maybe accurate but we were following Icon now barely visible on the horizon. We checked and rechecked the GPS and stayed on a lifting starboard tack providing overwhelmingly better VMG. (look it up) The first mark for us was Entrance Island and by 6pm we had only made 15 outa 25 miles. A small conference was held and soon we were underway, under power arriving back at WVYC just at sunset.

A great feature of this race is you can visit www.southernstraits.ca and follow each boat via a transponder. They had a bigscreen set up in the club and we watched as Icon and Night Runner battled into the night. Proving that it is never over until it is over Icon went from the penthouse to the outhouse and back several times but they were ahead by over nearly and hour when it mattered at the finish, that is the way to start the season. Night Runner hung it out into Saturday night but eventually gave it up, did I say it was light? It was... 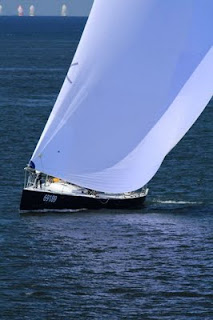 Posted by captain midnight Posted on Sunday, April 24, 2011
Email ThisBlogThis!Share to TwitterShare to FacebookShare to Pinterest