Round the County Roundup!

Each fall local racers start @ Lydia Shoal for the annual circumnavigation of San Juan County. This year six AYC burgees were represented on the start line.

The winds were Southerly and boats headed North to Patos with all the laundry flying. A headsail reach to Turn Point and short beat to the finish and most boats were done in time to catch the WSU game. Sunday the start line and RC work made for lively conditions. A reach to Lime Kiln and a run to Davidson followed by a broad reach back to Lydia Shoal start/ finish line and one boat was on the trailer before the Seahawks hung on for a victory.

Icon finished the 60 odd miles in less tha 7hrs for a third in Div X. In Div II Pangaea beat Passepartout by by 12 minutes for an 11th and 13th respectively. In Division III where Schooner Martha beat the next monohull by nearly an hour the Celebration crew placed 4th, followed by Soulfood in 7th and The Wild Rumpus in 12 and 60th overall out of 73 despite losing their rudder near James Island.

Thanks especially to all the volunteers that made Friday night memorable including bartenders Pam Edwards, Walt Meagher, and Jerry Reilly. Money counters Tod and Alyssa Osbourne. Kevin Welch handled the wind and current breifing. Stephanie put together a slide show and cracked the whip in the kitchen over volunteers led by Lori Gillmer. Bill Bowman took charge of cheerleading and arm twisting prospective new members. Racing for 2011 is officially in the record books! 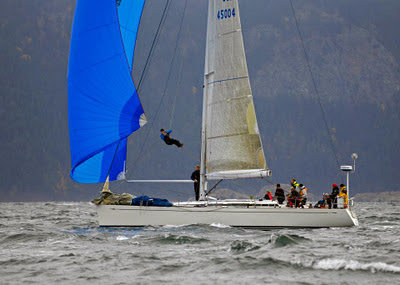 Posted by captain midnight Posted on Monday, November 14, 2011
Email ThisBlogThis!Share to TwitterShare to FacebookShare to Pinterest