Kevin Welch and the crew on his Perry 66 ICON blew away the competition in the annual Swiftsure Regatta last weekend sailed out of Victoria, BC.

This 138 mile race travels to Swiftsure Bank located just offshore of the Strait of Juan de Fuca and ICON completed the course in 18 hours! She achieved the trifecta, 1st to finish, first in class and first overall, by over hour. ICON was traveling in excess of 20kts on her way home under a full pres of canvas as the fleet took a beating.

Maydays were recorded for boats aground, man overboard, broken masts, broaches and many torn sails. Fortunately everyone eventually made it home safe, the Canadian Coast Guard is to be commended.

Last years winner AYC members Doug Fryer was third in their class and  Pat, Keith and crew were first to finish in the inshore race aboard Cat Sass. Checkout www.2012swiftsure.org for full results. 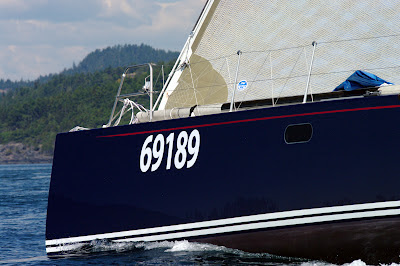 Posted by captain midnight Posted on Tuesday, May 29, 2012
Email ThisBlogThis!Share to TwitterShare to FacebookShare to Pinterest

The Big Daddy of the AYC regattas is the Gran Prix qualifier Windermere  Regatta June 9-10. This regatta features buoy racing, karaoke and legendary AYC hospitality. Moorage 75% off, complimentary champagne after racing Sunday, camping at the marina, clean heads and showers(don't forget quarters!). Each class winner qualifies for the Seattle Yacht Club invitational Gran Prix Regatta in October each fall. Racers from Victoria, Vancouver, Bellingham, the San Juans, Oak Harbor and even competitors from as far as Olympia on their way home from Swiftsure are known to appear. Sign up now to make it easy on the organizers.The following weekend is Saturday Womens Regatta and Sunday singlehanded race if you are interested in a Two'fer. In other news:
Steph and Andy Schwenk will stage the battle royale @ Swiftsure this year as Andy steps aboard last years winning ride, Doug Fryers Night Runner, on the other tack will be Stephanie on board Bravo Zulu the Beneteau 40.7 she plans to race in the Vic Maui this summer, they will compete in the long course against Kevin Welch and the star studded crew of ICON.
Birthday Boy John Sanford rallied from a dip in the drink last week to place second aboard his own Juan Pequeno this week. Emoyeni scored the first PMS (it's not what ya think) of the season. People are starting to talk on the dock wondering where the Maher's yacht is hidden. Capt. Dr. Gunn is tenaciously holding on to a 1`point lead headed into the final race of the Corinthian Series. B fleet has a 3 way tie for third. If you see Ian and Joy at the bar buy them a drink and thank them for handling RC duties in a tricky first series of the year. Did I mention it's time to surf on over to the Windermere site and get signed up!!!
Posted by captain midnight Posted on Sunday, May 20, 2012
Email ThisBlogThis!Share to TwitterShare to FacebookShare to Pinterest

Another beautiful weekend and the boats are out...and lots of activity at AYC.    Friday night's General Meeting (with 70+ in attendance) was highlighted by an absolutely spellbinding program by Mark Schrader....a fascinating synopsis of his OCEANWATCH circumnavigation of the Americas in 2010.
And then yesterday was our longest distance race of the Tri-Straits Series...Hein Bank (& only CAT SASS made it back in time to complete the course).   But 14 boats enjoyed sun and the challenge of zephyr winds and big ebb tides.
Coming up are Wednesday night Races & food, Garrison Bay Cruise (Memorial weekend), Waterfront Festival (June 2-3), Windermere Regatta (June 9-10) and Gen'l Meeting devoted to Clubhouse expansion (June 15).
And PLEASE, bartenders are needed for all, boats are needed for free rides for Waterfront Festival and volunteers are always needed!!!!
Watch the website and stay tuned and involved.....lots of fun in store!!!!
Posted by pangaeamac Posted on Sunday, May 13, 2012
Email ThisBlogThis!Share to TwitterShare to FacebookShare to Pinterest

21intrepid captains and their crews challenged the wind and elements for an evening of derring do. Well maybe not so much in the wind category but it did blow from two completely different directions so that makes it a little tricky. Results are posted but of course they don't tell the whole story. Chef Jerry proved that after raising five kids he can flip burgers with the best of them. Junior member Gabe Hill was the highlight of the dessert cart by providing locally produced Lopez Island Creamery ice cream for the entire club. Gabe says they plan to start a tradition so please support these fine sponsors and eat lots of that delicious stuff! MarKay Neumann and Mr. Jewett held down the bar and Ian and Joy covered RC duty. D fleet is open to any boat that shows proof of insurance and wants to come out and see what this wackiness is all about.
In other news: Passepartout departs at 9am this morning to go to Astoria for the Oregon Offshore race with AYC members Andy Schwenk and Jerry Vanderveen aboard. Surfin Bird, Wild Rumpus and the mighty ICON travelled to Sattle last weekend for the Race to the Straits. Long story but Surfin Bird is likely the only boat to complete both days, standby for results.... Windermere registration should be open this week!
Posted by captain midnight Posted on Monday, May 07, 2012
Email ThisBlogThis!Share to TwitterShare to FacebookShare to Pinterest
Newer Posts Older Posts Home
Subscribe to: Posts (Atom)