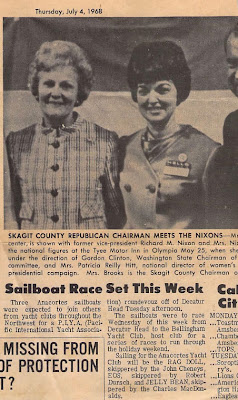 Dateline Thursday, July 4, 1968
Anacortes American
Sailboat Race Set This Week
Three Anacortes sailboats were expected to join others from yacht clubs throughout the Northwest for a P.I.Y.A. (Pacific International Yacht Association) roundevous off of Decatur Head Tuesday afternoon.
The sailboats were to race Wednesday of this week from Decatur Head to the Bellingham Yacht Club, host club for a series of races to run through the holiday weekend.
Sailing for the Anacortes Yacht Club will be the RAG DOLL, skippered by the John Cheneys, EOS, skippered by Robert Dursch, and JELLY BEAN, skippered by the Charles MacDonalds.

Also in this edition of the American, "Skagit County Republican Chairman Meets The Nixons." Does anyone recall these events?

Posted by LogicalBlog Posted on Thursday, June 27, 2013
Email ThisBlogThis!Share to TwitterShare to FacebookShare to Pinterest

Every two years on the odd numbered years when there is not a Vic Maui Race the Van Isle 360 is held. This regatta consists of 10 legs sailed over 14 days this year beginning the 8th of June. The race circumnavigates Vancouver Island and for all the details checkout the website. AYC was represented by Kevin Welch and the ICONIANS and Doug Fryer with Team Night Runner. From carbon to canvas, well actually dacron, these two boats could not be more different. Or could they? Both designed by Bob Perry, huge sail inventories, Night Runner carried 3 staysails, a jib top, a drifter, 1/2, 3/4, 1.5, and 2.2 ounce spinnakers, as well as a specialty reaching kite, Number 1, 2, 3 and 5 headsails the spare main rode in the Northwest Rigging support van. ICON was ably assisted by "SWAN" a 70' Monk powerboat and I'm guessing their sail inventory is similarly complete. ICON has an antenna farm on her transom that appears to rival the NSA while Night Runner is generally guided by Jerry Vanderveen and a handheld GPS. AYC member Ian Sloan handles the driving duties at the start aboard ICON while Doug Fryer with over 60 years of sailing experience under his Sou Wester only gives up the helm long enough to check the fathometer every now and then. Both crews are primarily local boys, the old ones on Night Runner and the young guns on ICON. Looking for the ladies? Look to ICON and Ian's wife Joy handling everything from logistics to the main halyard, also Kevins' wife Jenny looking for secrets to steal for use aboard "Soulfood", it would be easier to find a female in a Turkish mens prison than aboard NR. Kevin's sons Eric and Christian are also among the ICON crew while Doug's son Daniel, assigned to the 3/75 Ranger Battalion, is preparing for a deployment to Afghanistan. (Keep him in your prayers.) Both boats have Swiftsure, Southern Straits and numerous Seattle regatta victories and rumor has it that ICON may be out to better Night Runners Vic Maui podium record. I think Bob Perry is justifiably proud of both of these designs. First class programs defining the breadth of the PNW sailing spectrum. How did the race go? As Kevin Welch was quick to remind me, Night Runner already has her victory for this year, (Swiftsure). Congratulations to the Big Blue Show, ICON, Captain and crew brought home the silverware, again!
Posted by captain midnight Posted on Sunday, June 23, 2013
Email ThisBlogThis!Share to TwitterShare to FacebookShare to Pinterest

AYC has not waisted one lively breeze nor backed off one click from full steam ahead as we move into the second, and hopefully, sunnier quarter of 2013.


Swifsure:     As noted, Doug Fryer and Night Runner, with several able crew on board from AYC, sailed back into Victoria Harbor to win the 2013 Swiftsure Classic for the second time in three years.  Doug was also honored for having sailed in a remarkable 45 Swiftsure races.  Wild Rumpus won the Inshore Regatta making another notable mark on the 2013 Swiftsure for AYC.


Garrison Bay Cruise:  While the Swiftsure racers were battling for the last breath of wind in the Straits of Juan de Fuca,  the annual cruise to Garrison Bay proved that necessity is the mother of invention.  First, the AYC support boat Race Knight was towed to the event proving a nifty ship- to-shore boat while neatly advertising the presence of our Club.  Solving the problem of limited activities ashore imposed by the new park administration, Sean Kelly and Kip and Danette Carroll rafted their boats, Pacific Drifter and Ulysses stern to stern forming the core of what became a 6 boat party barge.  The solution was so successful, the cruisers may not be land based ever again at Garrison Bay.  This event will likely take the Pure Fun Award for the Club for the month of May.

Seattle NOOD (National Offshore and One Design Regatta sponsored by Sailing World):  Kaa, skippered by Steve Orsini with crew Garrett Johns and David Way,  were tied for first place going into the final day of racing on Sunday May 19th in the 5 boat Viper Class.    By the end of the day, Kaa, with a total of 16 races completed in two and a half days of racing, won first place in Class.  Representing AYC beginning in 2008, in two different one design boats, the team of Johns and Orsini have won their Class in three Seattle NOODs and were selected the overall Regatta winners in 2008.

Waterfront Festival:  AYC emphasized service to its community by providing its customary free boat rides at the June 1-2, 2013 Waterfront Festival.  The indefatigable duo of Catherine Bearce and Bob Neuman  had the complex event, 54 AYC volunteers and 14 boats,  running like a Swiss watch.   Over the two day Festival, 324 individuals were given boat rides, some for the first time in their lives.   Thanks to all the volunteers and especially those AYC members who offered up their boats.  Lots and lots of smiles from the public coming in off the rides.

Expansion:  BT&D Construction has the addition moving forward in a timely fashion.  Fred Abelman has been doing a yeoman's job as project manager and has been working many hours with the City of Anacortes, its Fire Department and the Port of Anacortes to get the 8 inch fire main and hydrant, now a requirement, to the Club property in a cost effective and timely manner.  The sub-contracts have been signed for the sprinkler system and the heating and air conditioning system.  BT&D worked with Fred and AYC to have the excavation work around the addition back-filled and gravel laid to the back of the Club to facilitate the Windermere Regatta Barbecue Dinner.  (Remember, do not park in the back of the Club yet.)  Beth Bell provided a bid for the flooring in the new addition including re-carpeting the existing upstairs carpet area.  The carpet was picked at the May 28 Board Meeting with an eye to color and finish to resist gallons of red wine spills!

Windermere:  Right around the point (in time- June 8&9) lies AYC's Grand Prix qualifying Windermere Regatta.  Michael Strauss and Jamie Riggs volunteered to organize this year's event and have been on it like white on an egg.  They have amassed a potent set of volunteers from Par Barrett and Mark Dobie, on the water PRO officials, to Steve Cox, and his galley crew, already with a stunning menu for Saturday eve's dinner.

Lido 14 Sundays:  Lido Racing could not have been better than Sunday afternoon, June 4.  The sun smiled warmth while a 5 to 7 knot northerly rippled Fidalgo Bay.  Colin Orsini with crew Lisa Acomb proved hard to beat but David Way and Patrick Smedile in the Fleet 78 loaner Lido, Killer Tomato, were often right on them with a couple of close starts.  Clay Wilcox and Beth Bell had Clay's lovely Lido in contention and are quickly learning the necessity of good crew work in a one design fleet.   Steve and Ginger Orsini were ably assisted by four-year-old grandson Mose who is working on his tacking skills-(moving from one side of the boat to the other on cue.)

One of the goals of the Anacortes Yacht Club is to provide the infrastructure to get people out on the water in meaningful, enjoyable and safe formats.  For this quarter of 2013, we are on target.