The Anacortes Yacht Club did it again...Clubhouse and deck packed to capacity for a fun evening with lots of good food and great camaraderie.  Lucky for those there, the work was done by the High School sailors and their parents as a thank-you for all the support given this past year by AYC members!

The evening was a huge success thanks to the great attendence and generosity of donors.  In total the event raised $1240 which will go to the Anacortes Parks Foundation Youth Sailing Program.

For those who couldn't make it Friday night and would still like to make a much appreciated contibution to the Youth Sailing Program, you can do so by copying the link below to your browser:

Thank you very much!

Posted by pangaeamac Posted on Saturday, May 30, 2015
Email ThisBlogThis!Share to TwitterShare to FacebookShare to Pinterest

What happens when 24 boats gather in Garrison Bay and plan a potluck? Over 50 people have a great time! There was always something going on at the central raft-up of 11 boats. Sunday was the busiest with blindfolded dinghy races followed by kayak racing, both forward and backward. A leisurely kayak cruise followed, then we all went ashore for a picnic dinner.
Hikes were made to the top of Young Hill, to the Alpaca Farm, and even all the way into Roche Harbor and the Sculpture Park. Others found their way to ice cream and burgers in Roche via boat.
Make sure you get this annual cruise on your calendar next year!

Posted by LogicalBlog Posted on Tuesday, May 26, 2015
Email ThisBlogThis!Share to TwitterShare to FacebookShare to Pinterest

AYC in the frozen North

Each Memorial Day weekend for 72 years the Royal Victoria Yacht Club has sponsored the Swiftsure Regatta. It has grown into a family of five races. Let's start with the largest from Victoria around a mark about 15 miles off the mouth of the Strait of Juan de Fuca, The Swiftsure Lightship Classic. The lightship is no longer on station but the mighty NightRunner a Perry custom 42 cutter skippered by Doug Fryer with several AYC members aboard battled the sunshine, favorable current and steady winds to second in her division.The newest race, the Hein Bank Race to Neah Bay, Hein Bank and return was dominated by Kevin Welch and the ICON crew stealing a ride on the TP-52 Valkyrie and winning the pickle dish in this inaugural event. The Cape Flattery Race really only goes to Neah Bay and since no AYC boats participated we'll go with Lightscout a J-120 with a bunch of the old AJAX crew aboard as well as me. We set the heavy one at the start, rounded the 1/2 way point before 5pm, bolted on the BBQ after we got the kite up. As we blazed back up the strait we feasted on steak and baked potatoes with all the fixins. Full bellies, first in class 2nd overall, yeah I'll be back next year! The Juan de Fuca Race goes to Clallam Bay and back. Kymodoce with culinary expert Walt Meagher aboard battled to a 7th in the H-2 div. Bangarang was 8th in L-2. Interestingly this course is known for small fast boats but was won overall by a Catalina 42, just like our Girts Rekevics Foul Weather Race. Maybe time to consider purchasing this classic American speedster.Swiftsure also has an inshore regatta for folks that wanna be a little more civilized. Wild Rumpus with Steph and her offspring were the top American boat and just made the podium with a 3rd in div and 9th overall. Newest AYC members, well they probably will be after the board meeting tonight, Marshall and Sarah Brown also competed before slipping away to Garrison Bay in the Dolphin II. Swiftsure has something for everyone and after 35 years, yes I've missed a few when I was in the military, I can tell you it's a good time every time and the Canadians know how to make you feel welcome.
Posted by captain midnight Posted on Tuesday, May 26, 2015
Email ThisBlogThis!Share to TwitterShare to FacebookShare to Pinterest 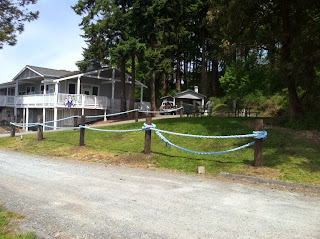 Thanks a lot for a lot of work, the holes took Sean and helpers with the auger much effort, at least 3 people to get the piles into the ground, and 3 people on the rope at every pile. It truly was a lot of work. Special thanks to: Ed Kennedy, Warren Waltz, James Cashetta, Sean Kelly, Richard Schofield, Bob Barry.


The Yacht Club also needs to remember & thank those that donated items or equipment:
The 18 - 7' X 10" piles by Culbertson Marine Construction,
The 300' of 3" new clean Hawser by Crowley Maritime,
A lot of labor, plus 2 picnic tables/bench and 1 bench by our tenant's work party from Fidalgo Island Rotary,
A lot of equipment (Auger & Truck) from Sebo's.


Without this equipment and labor, we would still have a weed patch directly south instead of a nice park area adjacent to the club house.


Thanks again to those AYC Member that helped with the work parties on Saturday Morning @ the new and improved pocket park adjacent to AYC.


Phil Case & Warren Walz, Past Commodores
Posted by Tortuga Posted on Monday, May 11, 2015
Email ThisBlogThis!Share to TwitterShare to FacebookShare to Pinterest

Check out these cool videos by AYC member Brad Blymyer of the Tulip and NWISA High School District regattas recently held on Fidalgo Bay in Anacortes.
Posted by Unknown Posted on Wednesday, May 06, 2015
Email ThisBlogThis!Share to TwitterShare to FacebookShare to Pinterest

Kudos to Dave and Terri Bawden and all the cruisers (25+ boats and 50+ people) who enjoyed near perfect weather (it was just a bit cool and breezy Saturday), clear skies, a full moon, accommodating tides, great hikes, marvelous food (& libations), wildlife (Orcas cruising by), activities (ugly shirt, hula hoops and stories) and, most important, just great camaraderie!!!   It just doesn't get any better than this.  Thanks ALL!!
Posted by pangaeamac Posted on Monday, May 04, 2015
Email ThisBlogThis!Share to TwitterShare to FacebookShare to Pinterest