Excitement, excitement!   So much going on here.
The Louis Vuitton America's Cup Challenger Playoff Finals are underway: As you probably know by now, in Saturday's racing, NZL won the first race. ARTEMIS (Sweden) won the 2nd and were leading in the 3rd when during a tack at the last windward mark helmsman Nathan Otteridge slipped overboard, so NZL ended the day up 2-1.  In day two, Sunday, ARTEMIS won the first, NZL the 2nd and in the 3rd race NZL won by ONE SECOND...both boats crossing the finish, reaching at nearly 40 knots in 14k of wind!!!!
Today they'll go at it again.  The first to get 5 wins going on to meet ORACLE next week for the CUP.   The sentimental favorite, overwhelmingly, here is ARTEMIS.
Today the Red Bull Youth Sailing starts with 12 under 24y/o teams fleet racing in the foiling AC45's. These teams represent 12 countries and with fleet racing format, it's really amazing.
And then the Super Yacht regatta starts tomorrow, including 6 of the fantastic J-Boats of yesteryear. What a sight.
If interested, visit the 48North Website where Wendy and I are posting (which gives us 'Media Status' and Access here).   More to come...stay tuned. 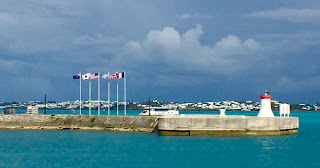 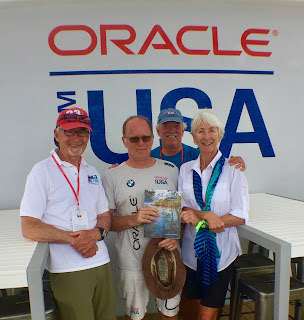 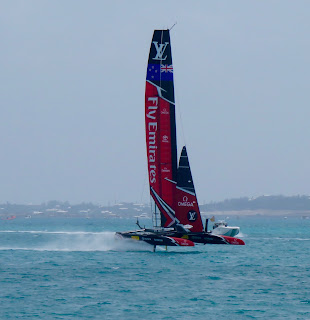 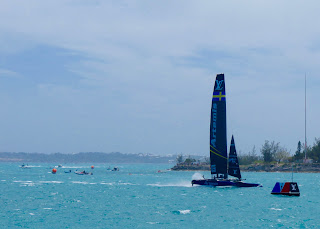 Pangaeamac
Posted by pangaeamac Posted on Monday, June 12, 2017
Email ThisBlogThis!Share to TwitterShare to FacebookShare to Pinterest